Who Else Wants To Learn...

Most Martial Artists Will NEVER Know...

Discover The Proven Methods for Using The Power of Your Mind, Body, & Nervous System For Maximizing Your Self- Defense and Life Protection Skills In Minimum Time!

In this 3-Day Live Training you'll discover an entirely new way to approach learning and teaching self-defense along with very Powerful, Highly-Effective and Easy-To-Learn techniques that fit easily within any martial arts or self-defense system that you currently practice and can even be used by people who have no previous self-defense or martial arts training.

This course will be a Safe, Fun-Filled Fast-Paced, Deep-Dive into some of the most cutting edge self-defense skills ever devised, including:

What This Four-Day Self Defense
Training Is ...NOT About!

It's Not About Styles, Its about Skills

People are constantly arguing about which martial arts style or self defense system is better, style A or Style B?  Real, Tried and True Martial Artists Know that Its NOT The Style That Wins The Fights.

It's The "Person" Who Wins The Fight. If a person has good skills and the right mental attitude he or she will win.

Even if they are NOT trained in any particular Style. Ask any black belt who has ever got his butt kicked in a bar fight.

Smart martial artists also know that every style has things it does well and every style has things it does not not deal with very well. The Gracie Brothers Proved That almost Over Two Decades Ago when they challenged stand up fighters to fight them on the ground. Many people discovered they didn't have the skills they never thought they would need. Now ever good martial artist is at the very least more familiar with what to do on the ground.

That's why every really smart martial artist I know believes in cross training. In constantly finding ways to improve upon your own personal style of martial arts or self defense and then testing those skills to be sure they are solid and reliable.

That's Why This Course isn't About Ryukyu Kempo, Jujitsu, Escrima or any particular style of Kung Fu, nor any of the other thousands of martial arts systems that exist, its not about Wa Lu, Or Wing Chun or Systema, Aikido or Aikjujitsu.

Its More Important Than That... In the Words Of Bruce Lee

Bruce Lee Knew Being The Best Wasn't About Styles and many times not even about techniques,

It Was Really About Skills!

And on October 20-23, 2022 Grand Master Chris Thomas and I Are Going Share Some Amazing Skills.  Skills That Can And Will Take You To The Next Level In Your Training.

Skills and Training Methods That Have Been Distilled, Concentrated and Organized Into  a cohesive set of easily learned modules that fit and flow naturally within any martial arts curriculum or self defense training regimen, they can be used as part of an overall course of study or simply a special set of applications for supplementing your skills where and when you need them most.

These skills are NOT based on a particular style but rather extracted and distilled down from many styles and systems that specialize in a particular aspect of combat.

Using the Power of Neuro Linguistic Programming and other Modeling and Mind Training Techniques I have spent the last 25 years exploring, extracting, distilling and testing these unique skill-sets as part of my own personal study for gaining a devastating and lethal advantage over the competition. In any venue.

I've NEVER Shared All of them with anyone.

In this unique three day intensive My Special Guest and Friend Grand Master Chris Thomas one of the world’s leading authorities on the hidden pressure point self-defense secrets of the Asian Martial Arts Will Show You the Precise Steps and Exact Methods that Only the Martial Arts Elite Have Ever Known, Secrets that have been Lost, Kept hidden, Or Simply misunderstood for hundreds of years... Until Now.

Here's What You'll Be Doing After You've Had Training.

You'll also learn how to take and withstand these kinds of strikes so that you can Learn how to be be mentally and physically tougher than your opponents expect.

The ability to absorb and reflect force is one of the key elements in internal martial arts training.

One that does not require extra size and strength but a clear understanding of how the body and mind work together for that inner strength to come out.

Techniques that fall into this category can be found in every internal martial art from Tai Chi, To Aikijujitsu, Kenjitsu, Ninjitsu, Silat and Systema, Even Bagua, Hsing Yi and Yi Chuan.

We will show you what all of these practices have in common, what was missing and how most of them actually work using a modern understanding of the human nervous system and bio-mechanics.

Learn How To Become An Irresistible Force Or or An Immovable Object!

All hype aside, perhaps one of the most obvious and well publicized aspects of Aikijujitsu, Aikido and of Course Tai Chi Chuan is their unique ability to Remain Completely Unmovable When They Chose to be and To Effortlessly Seem To Flow Out of Any Position Or Lock they find themselves placed in.

Combine that with An Almost Magical Ability To Send People Flying Across The Room With Little To No Effort using this mysterious force called Ki or Chi and you have the stuff legends are made of.

Many people spend a lifetime trying to figure out how to make those things work and NEVER DO.

I've spent the last 20 years deconstructing these arts so that you can learn how to do it in just a few days. Now keep in mind, mastery (whatever that means) can take a life time, but it IS possible to learn the Right Skills The Right Way, so that you focus your efforts in the RIGHT DIRECTION.

Let us show you the shortest path.

A path that dramatically shortens The Learning Curve and gives you a practical, reliable and consistent winning edge to your combat skills. During this four-day event GM Thomas and I will show you very special drills and hidden principles that will allow you to do these things in just days, and then you will just get better the longer you practice. 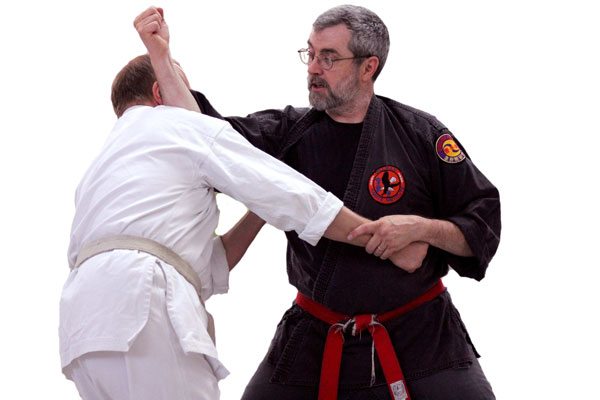